While Portland is not exactly known as a dangerous city, it still has its problems when it comes to property crime. In the business community especially, facilities managers and small business owners can fall into the trap of thinking that they don’t need security because Portland is relatively safe. While it’s true that a large share of our Portland clients never experience a break-in, the value of having a quality commercial alarm system to help your business be wildly successful goes farther than just detecting burglars. From simply deterring crime with lots of signage to actually catching criminals in the act, a commercial alarm system protects your assets and gives you peace of mind to focus on running your day-to-day operations. 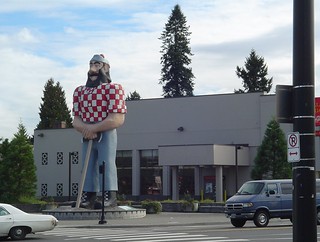 The Paul Bunyon statue down the street from our Portland office While violent crimes have gone down, Portland’s property crime rates have increased lately. Unfortunately, even statistics can’t persuade some business owners of the need for what can be seen as “just another expense.” Just last month, news outlet KOIN profiled several SW Portland restaurants that had experienced break-ins:

Several restaurants were recently hit, with thieves getting away with thousands of dollars and expensive items. More than a dozen burglaries have been reported just off Macadam Avenue alone.

Police still have not found whoever is responsible.

Elephants Delicatessen in Southwest Portland is just one recent commercial burglary victim. It was robbed of “cash, as well as some other portable items,” a deli spokesperson told KOIN 6 News Tuesday.

Add to the list of recent victims the Thai PK Restaurant. Its next-door neighbor is Bamboo Grove Hawaiian Grille.

“We were surprised,” said Francis Doo at Bamboo Grove Hawaiian Grille. “But then again we’re in a neighborhood where you don’t expect stuff like that to happen — but when it does, [we ask] what do we need to do now? So we took some precautions. We have security here.”

There have been 11 commercial burglaries reported in this area over the past four months.

Our philosophy about security is that it should help you make money, not lose it. By protecting your investments from theft, fire and water damage, commercial alarm systems in Portland help your business stay afloat and thrive. A word of caution, however; not all commercial alarm systems are created equal. Rather than leech money to false alarms, long service calls or the repair of faulty equipment, it’s better to choose a quality system from the get-go. Make sure that you find a vendor that provides verified security and won’t nickel and dime you for service and maintenance. By choosing a verified alarm, you sidestep false alarm fines, wasted time spent on checking on false alarms, and you help our police forces focus on real emergencies rather than fake ones. Commercial alarm systems can offer real benefits for Portland businesses of any size.