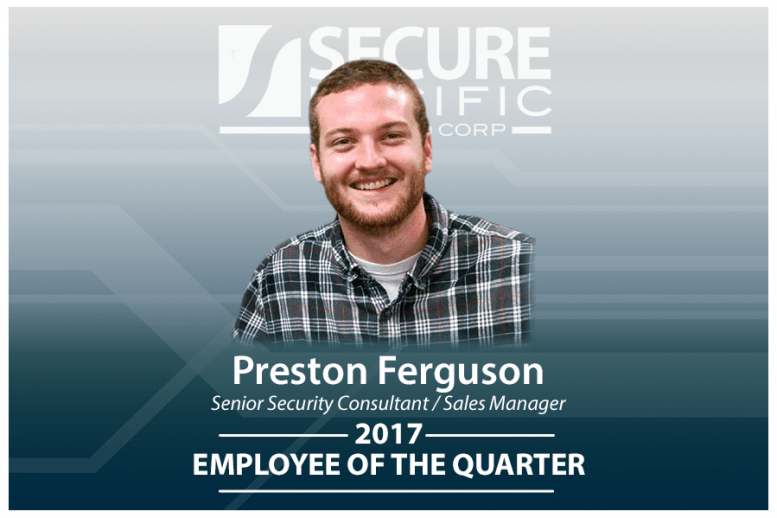 Congratulations to Preston Ferguson, who has been named Secure Pacific’s Employee of the Quarter for 2017 Q4. Preston initially joined the Secure Pacific Seattle branch in August of 2013 as a Customer Service Representative (CSR), mainly servicing construction and job-site security. From there he worked as a Job-Site Security Consultant and also as an Account Manager.

Here are some of the things his peers and managers have said about Preston:
“Preston consistently performs at a high professional level and is always ready to assist, train and help others in the company. I have reached out to him numerous times and he always responds within minutes with an answer. He has helped our growth into the construction industry here in Spokane. My last two sales, Bouten and Lydig were made possible through Preston’s professionalism and reputation. Bouten and Lydig requested references from their Seattle offices, the deals were done quickly here in Spokane after the Seattle offices praised the relationship Preston had created. It’s great to stand on his shoulders!  Preston represents Secure Pacific in a positive manner. He lives One Team, One Goal.”
-Brad Carpenter, Spokane Branch Manager

“I want to make sure that Preston gets recognized for the help he offered in the Portland area on a recent job that got installed. He was very valuable in helping the techs in the proper way to get the job installed and the training he provided. It’s much appreciated that the company is willing to provide the skills of others in order to be a successful and efficient business.”
-Ryan Collinsworth, Field Operations Manager Portland

Preston has recently accepted a new position as Secure Pacific’s Sales Manager for the Portland Branch.